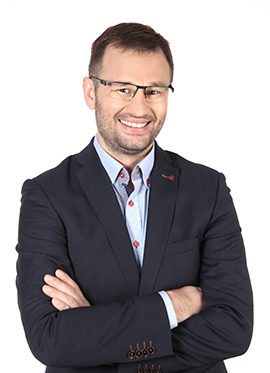 A graduate from the Department of Law and Administration at the Silesian University in Katowice. He completed his studies in 2001 defending his legal thesis on author’s rights.

He gained his experience while working in a listed company under a supervision of a senior lawyer. Since 2004 he has worked for a law firm providing legal services to middle- and large-sized companies. His duties included providing services for the clients, preparing and negotiating contracts, preparing written statements of claims or defence in Civil, Criminal and Administrative Courts, participating in partners’ and shareholders’ meetings, writing opinions and other legal duties.

In 2004—2007 he was an applicant at the Judicial Legal Training, tutored by the President of Court of Appeals in Katowice, which he completed passing the judicial exam.

He set up his business and has been active on the market of legal services from May 2007. Throughout this time he has cooperated with the legal offices mentioned above by providing legal advice for the clients.