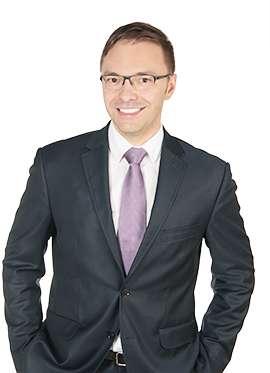 A graduate from the Department of Law and Administration at the Silesian University in Katowice. He completed his studies in 2001 defending his legal thesis on the rights of commercial corporations.

He started gaining his experience at a legal department of a large IT company. His duties included preparing and negotiating contracts, writing opinions in various sections of law, preparing company’s legal acts, forms for registration purposes, means of legal protection in cases concerning public tenders and providing legal advice. He set up his own business in the scope of legal services in January 2008.

In 2004—2007 he was an applicant at the Judicial Legal Training tutored by the President of Court of Appeals in Katowice, which he completed passing the judicial exam. He is listed on the Barrister List by the District Bar Council in Katowice, and he has been performing the duties of a barrister since July 2009.